How to make a belly dance bra 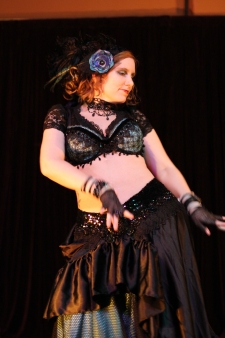 I am a tribal fusion dancer, however, I sometimes dance “Tribaret” a combination of tribal and cabaret that I learned from my former teacher, Severina from when I took lessons at Gypsy Caravan studio. Cabaret costumes are expensive but very glamourous. I have bought second hand belly dance costumes from other dancers. When I do this, I end up modifying them to fit my body. These costumes are beautiful, but they are still expensive even second hand and a lot of work to modify. It is almost as much work starting from scratch. I also have found that it is possible to make a cabaret bra by starting with a bra that is already pretty, using strings of pearls, rhinestones and sequins and adding appliques. Below are some of the bras that I made. I would stay that I probably spent less than $20 on most of these and sometimes another $20 on the belts. However, if I was getting paid for the amount of labor that went into creating them, they would be worth a million dollars! Or maybe a thousand anyway. I made this bra when I first came to Eugene. It is a pretty bra I got on sale, probably at Kohls or Target. I added some beads, lace and velvet trim. It gives it a Victorian or maybe even a burlesque look to it. All that turquoise needed to be balanced with a belt that was equally bright and impressive. I purchased a strip of stretchy sequins from the Mill End Store in Eugene. Then I sewed similar matching lace and beads onto the belt and matching necklace. It was pretty but still not fancy enough for me. Over the course of three years I sewed black beads to the belt. Every time I performed with this belt I had sewed a few more on. Because the thread was white, I covered the ends that showed against the black beads by coloring it with a Sharpie. That mean I was always getting Sharpie on my fingers. One day when my sister, who is an avid crafter and beader, saw me doing this, she told me they sell black beading thread!

As far as the bra goes, it also matches the belt I sometimes wear with the blue costume. One thing I learned when sewing this bra is that you should never make a bra that opens in the front. If you do, you have to safety pin it closed just in case every time. Then you have to think of a way to cover the safety pin. Also, I sewed pretty beaded lace to this bra but it ends where the hooks are at the front. That means beads fall off when I open and close it. Every time I wear it, it is destroyed a little more. It is a shame after all that work! My second emergency belly dance costume. I bought the strip of rhinestones from a vendor at a Middle Eastern Belly Dance Event for a very good price. I cut it into fringe for the belt and for the bra. I feel very glamourous when I wear this costume like I am covered in diamonds. I have seen sheets of similar material at Ben Franklin in Springfield. I started this bra ten years ago using fabric from a tribal looking shirt that didn’t fit me. I love the fabric and it does have an ethnic feel perfect for tribal. Instead of using just any old bra, I hunted the sale racks for a bra that was the same color as the fabric, making my job covering it way easier. I didn’t have to cover the straps and I could let some of the bra show. It sounds so simple and obvious to match the bra with the fabric, but I never have done that with the other bras that I planned to cover completely with fabric. I always used old bras I didn’t want to wear anymore. Or thift store bras. In order to make the fabric fit the bra, I had to fold over places on the bottom. When I got done I decided it was too plain so I added sequins I purchased at the Mill End Store in Eugene. I also added fancy buttons. I can see the influence of my current love of cabaret sparkle mixed with my old love of ethnic fabric. I think I could easily add coins to the bottom and take off the rhinestone buttons and it would be tribal again, but for now, I will keep on sparkling.

I bought this bra second hand. It had some decorations but it looked empty and incomplete. I added some stretchy silver sequined ribbon to the sides and top because I didn’t like showing that much skin. I was considering buying a pack of rhinestones at the craft store, but forgot my coupon at home so I didn’t. As it happened I found a sweater or sweatshirt later that day at Kohls on Clearance for about $5 that had a whole bunch of rhinestones on it. It was hideous—and cheaper than buying the same amount of sew-on rhinestones from the craft store. I thought I was done with the bra, but recently some of the rhinestones came off. Then I found a string of rhinestones and had to add more. It isn’t quite ready, but it is almost there. I am still working on the belt/skirt and trying to figure out how to attach the silver beads in a place that is sturdy, while also hiding the white line of thread it is attached to. Arg! I’m stumped and I have too many easier projects I will probably finish first. I don’t know when I will work on this again.

For examples of merchandise I currently sell, whether it is bloomers, hair fascinators or steampunk jewelry, visit my other website: