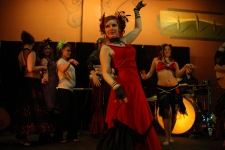 Whether you go to see a belly dance performance in Eugene, Oregon or a performance in New York City or somewhere in the Middle East, there are certain sounds and cues you will commonly see. When belly dancers interact with each other during a performance, they use non-verbal cues to encourage each other, signal they are about to transition to a different move and get each other’s attention. To someone who has practiced Middle Eastern dance and belly dance, this is nothing new. But for a novice or outsider, it looks like this is a secret language. Below are some of the signals used by dancers.

Hand and Arm Gestures and Cues

No, not those kind of hand gestures! But there are gestures that dancers use to signal a different move or combo. It might be as simple as a wrist circle or a change of arm position. For example, if a leader is doing the move gwazi with her arms above her head, she will move her arm into an L arm to show she is transitioning into a hip lift. This change of arm movement cues her followers that they are all changing. If the follower is counting or listening to the phrasing to the music it will make it a lot easier to know when to change as well because the leader’s changes are typically done to match the phrasing. If a lead dancer wants to change moves and she doesn’t think her followers will catch it, she might use a vocal cue.

This is a little yip sound used to get someone’s attention. If anyone ever sends me a good example of this in a video or music clip, I will post it here.

A zaghareet is a sound people in the Middle East use to encourage each other. Americans might know it as the sound that Xena, Warrior Princess makes as her war cry. It is a high noise typically made by saying “la la la la la” or “ya ya ya ya ya.” In some countries they use their vocal cords, not their tongues to make the noise, it some countries it sounds like “yow yow yow” and sometimes there is a flourish at the end like “la la la la la aaaaya!”

If you still don’t know what a belly dancer sounds like making a zaghareet, or you just want to see a funny video of No Shame Eugene’s Mad Viking and belly dance warrior princess in a battle to the fun, check out the No Shame Eugene “Ask a Viking” by Sarina Dorie and Jesse Wells. The zaghareet comes at the 2 minute mark.