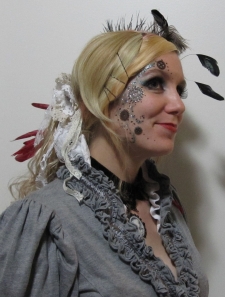 People often ask me what steampunk is. I have steampunk belly dance performances. I create steampunk jewelry and costumes. I write steampunk stories and novels. It is something that transcends my hobbies and carries itself into my day to day clothes as well.

The idea of steampunk harkens back to the era of Victorian science fiction like Jules Verne and H.G. Wells. In these stories, an older, steam-powered technology is created for amazing uses. There are many interpretations and slightly different time periods using steam technology that might be inclusive of this term, but I always reference the original science fiction authors who created this concept before it was called steampunk. Some people call it alternative history since we are writing about technology in a time when it didn’t actually exist.

Steampunk is the combination of something old with something new. Something industrial and gritty combined with corsets and ruffles. Often times technology plays a big part in this. One might see aviator goggles and top hats. A few months ago when I was presenting at Gearcon, I mentioned that I wasn’t sure why so many costumes have the goggles. I was trying to figure out the practical use for them. The answer was for flying in a dirigible to keep the smoke or bugs out of one’s eyes.

I have heard some cynics describe steampunk on Etsy as, “Just glue a gear on it.” Many stories with steampunk elements have no reason for people to be wearing corsets or be wearing goggles since it doesn’t further serve the plot of the story. It is the equivalent of the science fiction idea that a science fiction story has to have science that furthers the plot of the story and be a necessity in order to be considered true science fiction. This gets a little stickier when it comes to costuming or fashion design. It is hard to justify the goggles without the airship. I have plenty of pins, hair fascinators and necklaces that are made of upcycled parts. Often times my last touch is to glue a gear on it. I can only hope that with the overall aesthetic and the parts I use (something old-fashioned and potentially Victorian with something newer and more industrial) it will be more than the mere, “Just glue a gear on it” idea.

When I dance steampunk belly dance, I select music that has an old-fashioned feel. My costume is usually something I sew myself, made from upcycled parts. There is lace, ruffles, bustle skirts, and anything else that is fitting with the feel of an old era. My dance moves are basically belly dance though I sometimes include props appropriate to the Victorian era like an umbrella or fans. When I am writing steampunk, I am often incorporating elements from that actual era into the culture I have created. Since I have been a living history reenactor of the early Victorian era, this has given me a lot of knowledge to draw apon.

In any realm of steampunk, the idea is to make it fun.