Is Middle Eastern Dance and Belly Dance the Same Thing as Exotic Dancing? 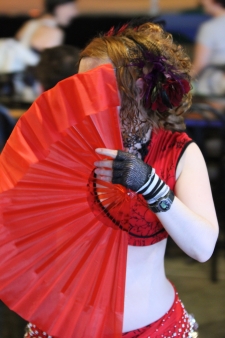 Why do people confuse  Belly Dance, Burlesque, Stripping and Exotic Dances and what do they have in common? If you are a belly dancer and someone calls you a Hoochie Coochie dancer, is it an insult? See a list of explanations and descriptions of each dance below. Some of the answers might surprise you!

This is any form of dance originating in the Middle East. It involves a huge spectrum of styles that do not range even close to belly dance. This might include a folkloric dance where a woman is completely covered, a dance performed by men or belly dance or could involve belly dance. In Eugene, Oregon, any dance that use Middle Eastern costuming, moves and music is considered appropriate for MEDGE (Middle Eastern Dance Guild of Eugene) shows.

Belly dance is a form of dance that emphasises the belly and hips. It comes from exotic lands like the Middle East and is based on folkloric dances from that region, but may combine steps and moves from other countries such as Turkey, India and Africa depending on the style of belly dance. If a dance uses modern, American music or creative costuming that doesn’t fit the ethnic look, it is often considered fusion belly dance. It is sensual and sometimes sexy, but it is based on an ethnic dance in origin and is NOT stripping. Sometimes people confuse the origin of exotic lands part with an exotic dance part. There is further confusion because people see the dancers wearing viels and they may remove them and use them as part of the dance. Cabaret style dancers in restaurants encourage tipping and people do body tipping, tucking dollar bills into the dancers costume which can look similar to strippers who have dollar bills tucked into their underwear.There are people out there who see the viel that belly dancers use and observe the body tipping and confuse belly dance as exotic dancing for that reason.

The hoochie coochie was an early form of dancing often performed by women of Gypsy or Eastern European descent that was deemed exotic and innapropriate because women showed their midriff. This is actually the name of early “belly” dance in America in the eighteen hundreds. It was called belly dance because the moves didn’t use the hands or feet. It was first shown in 1876 at the Philadelphia Centennial Exhibition and became popularized and notoriously scandelous in 1893 at the Chicago World’s Fair. It is thought that the term hoochie coochie originated from the term “goochie” which was a term in the American South for vagina. Hoochie now means a promisculous woman.

This form of art has been around for hundreds of years. Although there often is a strip tease in burlesque, the purpose of this style of dance is to entertain. There often is humor in the act and the dancer may tell a story or make fun of a story. The dancer may strip down to pasties—or not. If there is a strip tease element, a dancer may cover herself with feathered fans, viels, aprons, feather boas, fruit or any number of other items. Other opinions one may hear about burlesque is that it is classier and the performers have more glamorous and expensive costumes, others feel it is more of a vintage striptease than modern day stripping.

Stripping is a dance that removes all clothes except underwear. The purpose of it is to arouse. This form of dance has been around for thousands of years. In the biblical story of Salome dancing for King Herod it is thought that was be the equivalent to stripping. Oscar Wilde popularized stripping in contemporary culture in his play “Salome” with the infamous “7 Viels Dance.” Sometimes belly dancers remove viels, sometimes multiple viels. When they do so, but then later say they are insulted that people think they were stripping, they probably were not familiar with the origin of the 7 viel dance and the connotation.

Exotic dancing is another name for stripping.

For a longer explanation of the origins of belly dance, read the blog post “Where Does Belly Dance Come From?” or “What is the Difference Between Middle Eastern Dance, Belly Dance and Folkloric Dance?”