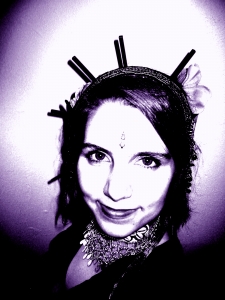 Many belly dance moves have roots in the Middle East and Africa, but breakdance and hip hop do as well. Many moves look very similar. What one culture calls twerking, another calls the Suhaila technique. The biggest difference is the posture which gives the muscle isolation technique used in both a completely different look.

What is the Suhaila Technique?

The Suhaila technique is a kind of shimmy that is done using the muscles  of the legs, thighs and gluts instead of bending the knees or twisting the hips to make the hips move. This muscle isolation technique was created by the bellydancer Suhaila Salimpour. Word on the belly dance street is that she started doing this as an alternative to traditional bent knee shimmies after an injury in a car accident limited her mobility. Although shimmies are not high impact, some people with knees problems have difficulty doing them without pain. Alternately, some people have difficulty with the Suhaila technique if they have sacrum, IT band or other hip muscle problems. Some dancers say this is done with the obliques, others the gluts. Either is good for toning the leg and hip muscles. The reason belly dancers may be interested in this technique is that it gives dancers a kind of shimmy they can do independent of what their skeleton is doing, giving them more options for layering moves.

Although I once had a great example video of Suhaila in a performance using this technique, I can no longer find it. An example one of my students once shared with me that I found easy to see and that also happened to be hilarious is below titled, “Woman Plays Beethoven on her Buttocks.”

In the below video titled “Classy Victorian Twerking” by Sarina, Seraphina and Margarita at No Shame Eugene, the belly dancers make a parody of twerking using belly dance, hip hop and burlesque moves. Some might consider the performance burlesque because it is comedic and there is some removal of clothes, however, when the question was put to an actual burleque dancer, she said that the dance was definitely not burlesque because not enough clothes were taken off. So I am probably safe to still be considered a belly dancer.

Twerking is a style of dance that is considered sexually provocative and involves a lot of hip movements, gyrations, pelvic thrusts and glut contractions while in a squatting stance. Although this can be viewed in accurate demonstrations in music videos done by African American dancers, Miley Cyrus made twerking a household name in 2013 with her performance with Robin Thicke. Although Miley Cyrus is being credited with twerking, yet most of what she does is bump and grind and dirty dancing, not true twerking. If you want to see how it is really done, check out some videos on YouTube.

“Grandma TWERK Team” is a pretty funny parody of Twerk Team. I also suspect I like this because the middle lady in the video’s comments remind me of my grandmother.

For a laugh, consider viewing “Twerking Grandma Does It All.” I suspect it is a parody of the parody of Twerk Team.

So what’s the difference between twerking and the Suhaila technique?

Here’s the difference . . . the real secret. . . . Twerking is done while squatting, the Suhaila technique is done with the legs together. That makes it . . . classier. Or something like that. Both take a lot of skill. The intention behind the dance may also differ.